Typically if I grill chicken, I just do the basic Bar-B-Que. This time I decided to try a recipe by The Happy Housewife. It turned out pretty good, although I did end up dipping some of it in bar-b-Que sauce anyways.

I’m really bad at remembering to defrost meat before it’s time to start cooking. And I’m also bad at leaving enough time to marinate it. This time I kinda tried to do double duty by putting it all into the crockpot on low for a couple hours while I waited for Seth (and the gang) to get home. It helped to not take so long on the grill, too.

I am not an asparagus fan. Honestly I’ve only eaten it a couple times and not really liked it either time. I saw this recipe on The Happy Housewife’s blog
And thought since I was already going to grill chicken, I’d give it a try. Honestly it was pretty good. 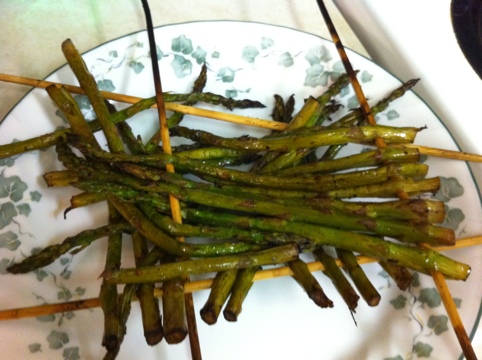 My only complaint is that it was hard to skewer the asparagus. Not sure if they were just not thick enough or I don’t have skewer-skills. And of course once I closed the lid of the grill, half of the asparagus ended up right on top of the flames and got super burned.

I’d still probably try to make it again or at least use the marinade and then put it in the oven. If I grill it again I think I’ll put some foil down so I don’t loose some of them between the grate.

Tonight was grilling night. I haven’t used our grill since we moved and that was in January! I made grilled chicken and grilled asparagus. (see the next two posts for recipes) Since I had the grill still on I decided to try some peaches. I’ve never really expanded past grilling meat so this was a new one. 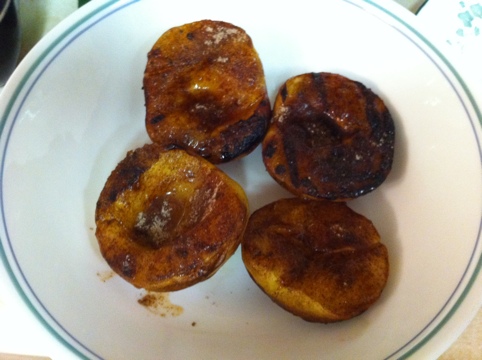 The peaches turned out delicious!! I could have eaten all of them. I used still firm peaches. Here’s the link:

I read this article a month or so ago and kept meaning to add it here to share. I was reminded again about it today as I’m struggling to clear off the desk with all these receipts, stacks of cards to finish and send (I always have such high hopes of sending out bday and other cards on time…alas, I usually fail), and things I want to post. Oh yeah, and this pile of jewelry I need to price and bag. That reminds me, I am soooo behind in updating my jewelry blog and my jewelry albums on facebook. Maybe one of these days…but to reassure everyone, because I’m so sure you’re just stuck wondering (lol, yeah right, I know), I am still making jewelry, but I just haven’t had time to update it all.


Ok, back to the subject. I found this article again under the pile of stuff on my desk and I figured that it kinda went with my rank from last night. So, here it is…


This is from my monthly newsletter from Samaritan Ministries (see Christian Alternative to Insurance for more info).


When Janet Sheikhan first discovered she was pregnant, she and her husband were thrilled. But then Janet received terrible news: A test showed the baby was severely deformed. On the advice of her doctor, Janet regretfully decided to have an abortion.

But when she asked to see her tiny aborted child, Janet was shocked to discover it was a perfectly formed baby boy. Later she read the autopsy report, which confirmed the baby had not been deformed but was perfectly healthy.

Janet was devastated to realize that because of a faulty medical test, she had aborted a perfectly normal baby. And when her story was told on 60 Minutes, host Leslie Stahl shared her outrage. The program focused on the mistaken test results, asking “Who is responsible for this tragedy?” Stahl treated the mother–who is, after all, the one who made the abortion decision–as an innocent victim.

Of course, the bitter irony is that every day thousands of healthy babies are aborted–not by mistake, but deliberately and intentionally. But programs like 60 Minutes do not treat their deaths as a tragedy. How is it that even thoughtful, well-educated Americans today exhibit such an astonishing moral schizophrenia?

The answer is that a baby’s entire value is now defined by whether or not the parents want it. The role of technology is merely to support whatever they choose. This radical moral relativism reveals how much Americans have become children of the Enlightenment. In the absence of a moral framework, all desires are considered equally valid, all equally legitimate. Without any overarching moral order, technology is merely an instrument to satisfy our impulses, whatever they may be.

That’s why “60 Minutes” could not bring itself to address the real moral conundrum–which is why the death of Janet’s baby was tragic while the deaths of thousands of healthy babies just like hers are a sign of liberation. No, the only socially acceptable scapegoat was the failure of technology to fulfill someone’s deeply felt desire.

Of course, it all begins with the assumption that a deformed child ought to be aborted in the first place–an assumption Christians everywhere ought to challenge. One of my own colleagues was told that his unborn son might have the same genetic defect that Janet’s baby was diagnosed with. But, as Christians, he and his wife did not seek a technological escape. Instead, they turned in trust to the One Who is the Resurrection and the Life.

Just as in Janet’s story, the diagnosis turned out to be mistaken. But, unlike Janet, my colleague now has a healthy baby boy and does not face the wrenching responsibility of having aborted his child in search of the perfect baby.

Recently I’ve been troubled by how mediocre American Christians seem to be. I notice this in our youth group, our young adults, our regular adults (is there a such thing?). I’ve noticed it among fellow Christians on good ol’ Facebook and I’ve heard it from friends in other states.

It seems like its more and more common place to be just that, common place. What has happened to the Christians that changed the world like in the First Century church? Of course we’re still sending missionaries to third world countries (praise God for that!), but did you know that more and more countries are sending missionaries here? To the “Christian” nation of the US of A? What does that say about us? What do other countries really think of us?

A lot of what I’m going to mention next is my opinion. I’m basing it on Biblical principles, but it is the so-called “gray” areas.

It bothers me when Christians openly drink. Yes, the Bible doesn’t say that drinking is strictly prohibited. It does say:

“For those who sleep, sleep at night, and those who get drunk, get drunk at night. But since we belong to the day, let us be self‑controlled, putting on faith and love as a breastplate, and the hope of salvation as a helmet.” -1 Thessalonians 5:7-8

“Do not get drunk on wine, which leads to debauchery. Instead, be filled with the Spirit.”
-Ephesians 5:18

I don’t think that drinking alcohol itself is a sin, but I do believe that starting down that path, even with one drink occasionally is dangerous. A person never knows if they have a heredity bent towards alcoholism…until its too late. I have seen my share of drunken idiots and depressed alcoholics from my previous job. Believe me, most of them didn’t plan on ending up where they are now. Also, as a Christian, why give some critical nonchristians anything to accuse you of? Why be a stumbling block to others instead of being the salt of Christ that they need to see? I just think its a dangerous path to be on when you’re voluntarily ingesting anything that can lessen your self-control and thinking.

And when I said “openly drink,” I don’t mean that you have to hide in your closet to drink a glass of wine. But please, does everyone need to know what alcoholic beverage you’re enjoying tonight? Do all 500 of your Facebook “friends” need to see that picture of you with that beer in your hand? You may never know what kind of an impact that had on others.

Onto #2: Entertainment.
Too often, we (myself included), aren’t critical enough of what goes into our minds and hearts. Music, movies, TV, video games, books, web browsing…all of these have a habit of entrapping our attention…and us…before we even stop and evaluate what we’re letting in. We get so wrapped up in the good “storyline,” the great “special effects” or the “beat” that we fail to notice that we’re being entertained by things that our Savior died to free us from. Maybe I’m being too unrealistic…or too strict. But am I really?

“Do not let any unwholesome talk come out of your mouths, but only what is helpful for building others up according to their needs, that it may benefit those who listen.” -Ephesians 4:29

Now, most people will say that what they watch and listen to doesn’t affect their own speech and thoughts. I don’t really believe that. I’ve seen and heard the opposite evidenced by discussions and confessions in D-Groups, Facebook statuses and the like.

“The heart is deceitful above all things
and beyond cure.
Who can understand it?”-Jeremiah 17:9

We can tell ourselves it doesn’t affect us, but one way or another it will come out.

Like I mentioned before, we all seem to be so entertained by the sin of others, things that Jesus died for. Why is that? Our minds have been so twisted into being entertained by sex, pornography, crude innuendos, filthy language, abuse, murder, crime, bloody horror, supernatural demonic activity and the like. We no longer seem to be able to enjoy good clean entertainment. Real life good stories are seen as boring and poor entertainment. It so bothers me! I was reminded of this a couple times this last week when we were going on netflix trying to decide on a movie with some of our youth. One time they were bored with a good clean movie. The other time they kept mentioning these “good” movies we should watch…that were all full of sexual references, nudity and language. They were frustrated when I mentioned any of the above, saying “they’re not that bad!”

Since when did “not that bad” mean they were good? I think thats the key problem with us Christian Americans. We’re content with filling our lives with things that “aren’t that bad” instead of
Seeking out the truly good, pure and clean. Why do we constantly push to see how far we can go without being past the line? This goes for all aspects of life: relationships, entertainment, drinking, language, etc.

Why are we satisfied with the commonplace? With fitting in and just doing barely enough? I think our saltiness is quickly being diluted. So, how long until the world completely throws us out? Until we’re trampled underfoot and useless?

I made this last night for our high school d group and it was pretty much devoured. It’s easy and super delicious!

So the girls and I had a “craft-er-noon” today and we made some sweet shirts! We used plastic shopping bags and made our own decals. They’re supposed to last well through the wash (at least that’s what the website says). Here’s the site I got the idea from:

There’s some additional neat links about the same Tshirt projects from this page, too.

Here’s a sample of our creations:
(They’re much better in person!) 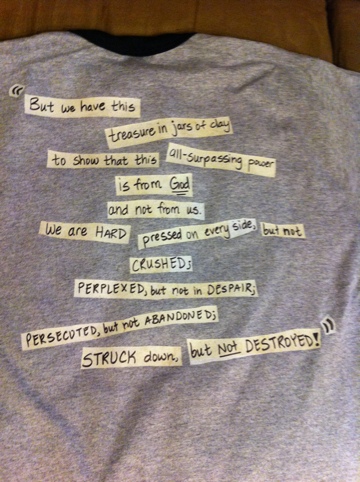 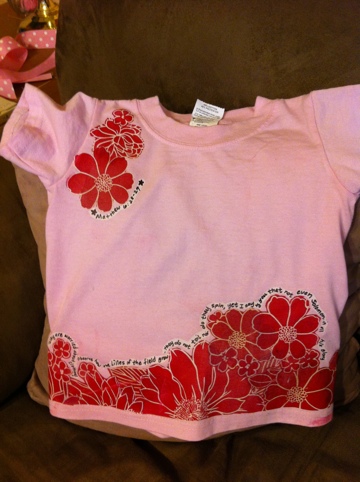 I admit, I’m a little obsessed now! There will probably be many more to come…