Filed under: Homeschooling,Life,Tot School — Lacey @ 12:45 am

Last week I tried planning out which letters I should teach K when. I tried to relate them to H’s FIAR studies (next week we’re rowing Ping so we’ll do D for duck and E for eggs). But some studies just couldn’t be matched up. During my research for alphabet tot school, I saw a suggestion to teach the letters that are in the child’s name. They suggested that this is helpful because the child will have more interest in the letter when you keep relating it back to their name and they’ll be one step closer to being able to spell it, since they’ll know those letters first. So, this week we are doing K for Kady. We did “A” last week and we’ll be doing “D” next week. The “Y” will work itself in within the next month. Then I’ll prob just fill in the alphabet in order when it doesn’t relate to H’s FIAR books.

Here’s some of the activities we did:

I brought out the K and keys paper. I tried to get her to trace her fingers over the letter with me, and to point out the keys in the K’s. Then I let her color it. She didn’t color much and ended up being more interested in peeling the paper off the crayons. I finally gave up trying to get her attention and let her peel away. After all, that’s kind of a fine motor activity anyways, right? Lol. And besides it kept her busy so I could do school with big sis.

Later I brought out the playdough, K cookie cutters, k magnet and the most exciting of all… Keys! She loved getting to play with keys! They were just ones we let H have to play with. Mainly those ones that come on junk mail for car sales. K kept trying to turn the key while pushing it into my arm. Not the most pleasant. I was trying to brain storm a way for her to have a real working key and lock that would be easy enough for her to use. I’ll have to talk to Daddy about that later. She enjoyed pushing the keys into the playdough and trying to turn them in it. 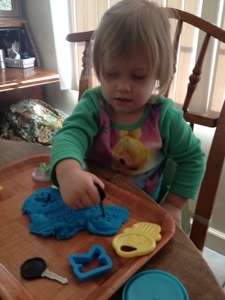 We used a worksheet from 1+1+1=1 (she has awesome materials on her website for tot school!). I colored the name of each color and tried to get her to put the matching marker cap on each one. She didn’t really get it. And she was more interested in putting the caps on her fingers. I’ll keep doing this with each letter though and hopefully she’ll understand it more soon. At least she’ll be hearing me name the colors if nothing else.

I made a sensory bowl with popcorn kernels, the k cookie cutters, k magnet and keys. She had a lot of fun with this and kept herself busy while I made dinner. Although she did make quite a mess with the kernels all over my kitchen floor. We swept them up, but combined with my dirty floor, they were too gross to use again. But she had fun while it lasted. And even big sis wanted in on the fun! 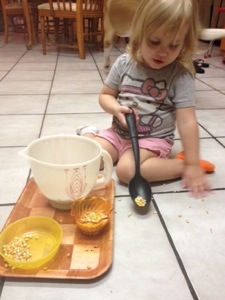 We tore up foil into small pieces (she enjoyed this part the most), then glued it onto a printout of a key (glue on the back of the print out so you have a clear pattern to cut out). She wasn’t too interested in sticking the pieces to the glue after the first couple. It took some coaxing. After it was finished we taped it to the wall by her bed with the “a” and apple from last week.

We also made this cute guy. I found the print out on Pinterest. She colored it (with some help), I cut it out and together we glued it together. This “roo” (as K calls it) is hanging on her wall, too!

We also did a few other worksheets from 1+1+1=1 that I forgot to take pics of.

Next week we’re learning about D as we continue learning the letters in her name and it also goes with big sis’ book we’re rowing!