I read this book a month or so as part of my empty shelf challenge (check out the details a few posts back). 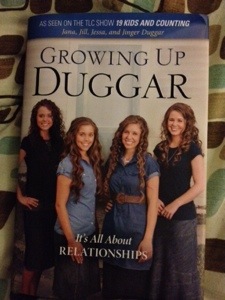 I ordered this book from amazon soon after it came out. I rarely order brand new books but I was really interested in what they had to say. I think most people are curious about how their kids feel about being a part of such a large family. And I was curious how their parents actually parent them. Of course I’ve seen some of the show (at least all of the first couple seasons), but I was still interested in more than the show may display.

This book was a really good read. I enjoyed hearing the girls’ side of things and also reading about the actual rules their parents have set in regard to dating and the like. They have a number of good ideas that I’ll probably want to implement once my girls are older.

I really liked the way that they deal with life and everyday temptations that girls face.

Here are a few of my favorite quotes. I hope they’ll be teasers that will interest you in reading the rest of their book. You won’t be disappointed. It’s useful whatever your religious beliefs or family size.

“Contentment is realizing that God has provided everything we need for our present happiness.”

“It’s unlikely that a dad would entrust his prized convertible to a teenage boy he didn’t really know and just let the kid take it out for a spin without supervision; but that same dad may let a relatively unknown boy drive off with his daughter without giving it much thought…girls want their dad to be their protector. They want to feel valued by their dad more than any possession he owns.”

“Every time the devil tries to tempt you to be fearful, to believe lies about yourself, or to get consumed with boy thoughts, take the focus off yourself by quoting God’s Word and praying for someone else. Satan definitely doesn’t want you praying, so eventually he’ll back off!”

“The choice to forgive doesn’t always free that other person from the consequences of his or her wrong actions, but it frees the forgiver from negative feelings toward the offender. And if we still have feelings of bitterness, the Bible says it’s importance not only to forgive the Other person, but also to go a step further and look for ways to bless him or her. ”

“Some of the greatest people in the bible were those who had made a lot of bad decisions earlier in their life, but then God got a hold of them, and they completely turned over the rest of their life to following and serving Him.”

“Satan’s power to keep us making the same mistakes is based in the secrecy of our sin. When secrets see brought to the light and we make ourselves accountable, it’s much easier to find victory.”

“We all hop to be wives and mothers someday, if that’s in God’s plan for us, so in the meantime we’re preparing for marriage and motherhood by acquiring as many skills as possible. We believe one of the best preparations for marriage is to develop a selfless, giving mindset that is always looking for ways to serve others, which is another way is serving the Lord.”

I really appreciate that the girls have such a great outlook on life:
“We want to learn all we can and prepare to do work that gives us tools and bring opportunities to share God’s love with others. That’s the career we want in life.”

They don’t only want to be wives and mothers. Which of course is still a nobel goal! But they are open to whatever opportunities that God has for their lives. They have already had a lot of awesome experiences (volunteer fire fighting, mission trips, work with female prisoners, midwifery, etc). I think it’s awesome that they are out in the world trying to make a difference and not just waiting around to find a husband to complete them. I goes totally against a lot of the “homeschool, conservative, sheltered lives” stereotypes.

Of course I don’t agree with everything they said or all of their family standards. Most of these areas of disagreement would be considered freedoms in Christ where we all need to carefully examine the Bible’s principles to determine our own personal stance. And we should never violate our own conscious if we are truly convicted in one of these “gray” areas.

For instance, I didn’t like their using only the KJV Bible Translation. It’s so hard to understand and no one talks that way today. I think the Bible translation we use should be in language we understand and we actually speak. Also, it would have been more applicable to their audience if they had used a more modern translation.

I also don’t agree with their stance on rock music. I respect their trying to please God and remove anything that may come in between their relationship with Him. However, I don’t believe their is anything wrong with or evil in having a musical beat. There are tons of awesome Christian bands in every musical genre that have great lyrics and messages. Also, from what I understand a number of the hymns’ music came from the bar songs of that time. So I don’t see how they’re that much more holy or innocent than any other type of music.

Finally, I don’t agree but still respect their opinions on girls attire and long hair, tv, and magic in shows. They encourage their girls to wear log skirts and long hair because they believe that God wants females to be feminine and not manly. I appreciate it their goal but I am not convinced that skirts and long hair are completely necessary to reach this goal. I really appreciate their trying to be modest though. I am one of those ladies who always wears an undershirt if I’m wearing anything other than a Tshirt. I also make my girls wear leggings if their skirts/dresses don’t already have shorts built in. That way they can be free to run around like all kids do without having to worry about exposing their undies.

As far as tv, we definitely watch more than they do, but we still try to keep a tight handle on it for our girls especially. We don’t have cable and we don’t just leave it on endlessly during the day. There are a select number of kids shows that H is allowed to watch from Netflix and there are some cartoons that they are not allowed to watch.

As far as magic, I’ve debated about this some throughout the years myself. I know that the Bible considers practicing witchcraft as a serious sin (and I agree). However, I don’t think that all fairy tales or magic in shows is bad per se. I don’t encourage my girls to play magic or pretend to cast spells but I have no problem with them playing make believe. In fact, I think it’s a positive thing for their development and imaginations. I also try to stay away from shows that have darker or more evil magic in them.

With all that being said, Growing Up Duggar is a great read. I highly recommend it! It will definitely make you think and evaluate your own family stances on issues. It will also make you admire the Duggar family for being able to raise so many children and still have their sanity!

The Wizard of Oz

We started this series kinda by accident. I found a number of books at a library sale with this being one of them: 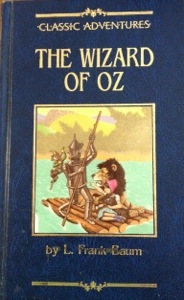 I didn’t have intentions of actually reading it w H yet. Honestly I’d never read it and wasn’t sure if she’d be ready for the contents. But once she saw the book she begged for me to read it to her. And she loved it! I enjoyed it, too. So much so that I started looking online for more L. Frank Baum books. That’s when I discovered that there is an entire series of Oz books (15!). Since H was so excited about them, I went ahead and ordered the set from amazon for around $30. Our set has five big books which each contain 3 of the Oz books. 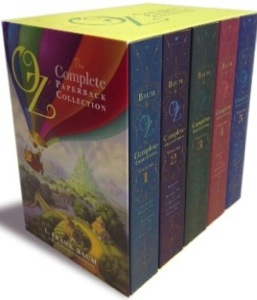 This made it easier to read and keep track of which books come when. I was getting quite confused when I was searching for them from the library. The original single edition books have long titles that can make it all pretty confusing!

So, since H was enjoying reading (listening) to the series so much I decided to so a unit study of sorts.

We got the original movie to watch from the library. It was interesting to watch right after reading the book. There are so many differences and it was neat to be able to discuss them with H. 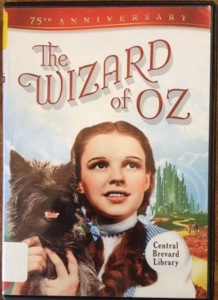 We’ve also watched a number of other versions from the library, too. 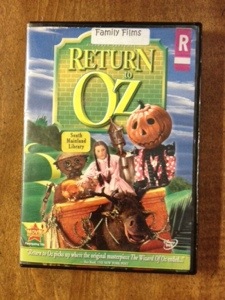 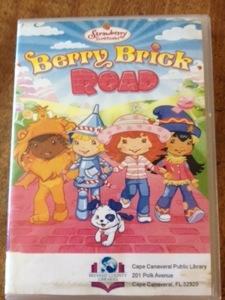 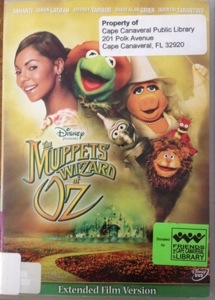 I watched this one first to make sure it was appropriate for her to watch. 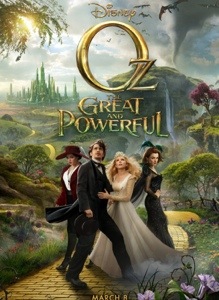 And I watched this one first too, but deemed it inappropriate for her. It was interesting but quite bizarre. It would have made more sense after reading a couple more books into the series. 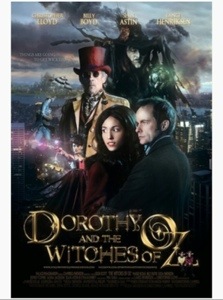 She also watched the first two (so far) of a 4 disc set from the library that I forgot to take a picture of.

She’s really enjoyed watching all these different adaptations and doesn’t seem to be bored with the Oz series at all.

I also did a Pinterest search for more activities to do along the Oz theme. Here’s my Pinterest board.

From my searches online, we made green spectacles like they use in the city of Oz. 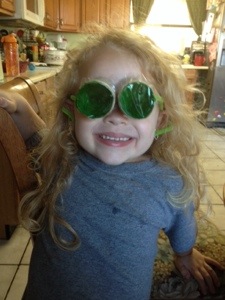 We did some watercolor themed Oz art. These are my pictures (they’re not that great, but I had fun doing them), she jumped around and didn’t completely finish any of her pictures (and I forgot to take pictures). 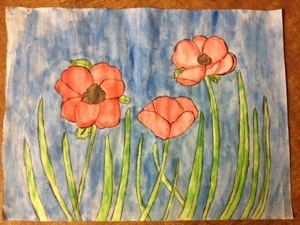 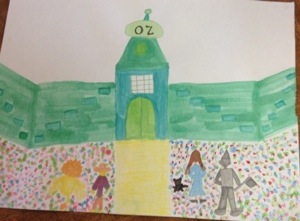 H also did a number of worksheets that I found online from Pinterest and teachers pay teachers (I only used the free ones). I was pleasantly surprised at how many there were! 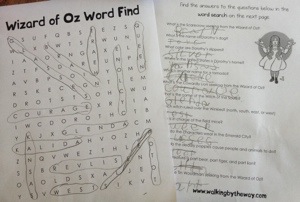 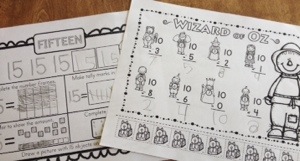 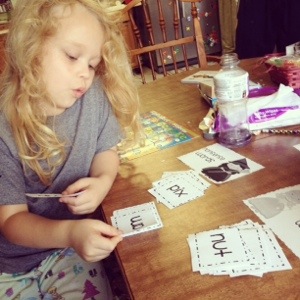 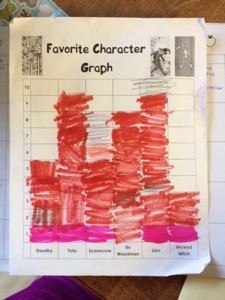 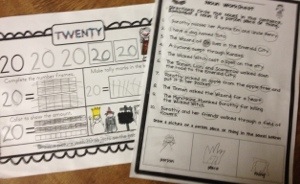 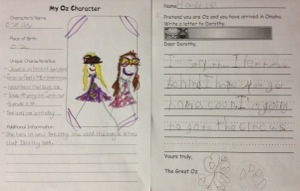 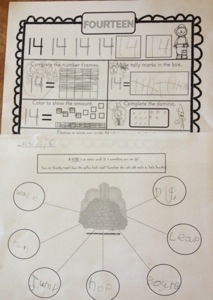 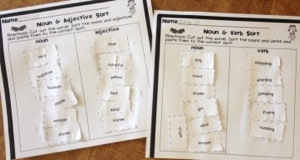 We also got this abridged but still very accurate illustrated children’s book from the library. I had daddy read it to H so that he could enjoy the story with her, too. 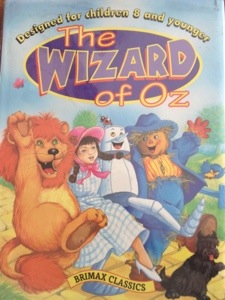 We also read a lot of the second and third books while we were on a mini road trip with big brother driving. It was neat for the kids and I to all enjoy the story together, especially big brother since it’s not usually around when we read and do school. It gave us a lot of good laughs and discussion.

Right now we’re halfway through the 6th book in the series (out of 15). H is still enjoying it a lot. In this book, Aunt Em and Uncle Henry finally get to see that the land of Oz is real and they meet all kinds of interesting creatures including paper dolls, puzzle people, and more….

My plan is to keep reading the books while we are doing our other Five in a Row curriculum. And if H gets bored with the books we’ll take a break until she shows more interest.